Last week, lawyers for House Republicans tried to squeeze the Defense of Marriage Act (DOMA) through an ever shrinking window of constitutionality. And, they had better hurry: The Supreme Court will, I am confident, soon close it for good. 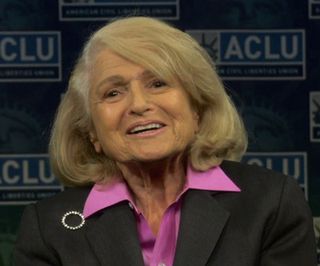 The occasion for Paul Clement's latest jurisprudential acrobatic act was the hearing before the Second Circuit Court of Appeals in Windsor v. United States, a DOMA challenge brought by the ACLU on behalf of Edie Windsor, who had to pay $350,000 in estate taxes when her same-sex spouse died. Had DOMA not been in effect, Ms. Windsor, like widows and widowers from opposite-sex couples, would not have had to pay a cent. That is because DOMA Section 3 states that the federal government will only recognize as valid marriages between one man and one woman.

You may recall that Ms. Windsor (right) and the ACLU won their case in the district court. There, Judge Barbara Jones held that DOMA was unconstitutional under any standard of review: those defending the law could not even offer a legitimate and rational reason for discriminating against gay couples in the provision of federal marriage benefits.

But, every step in this particular DOMA case — the others are Gill v. OPM and Massachusetts v. Health and Human Services, already waiting at the Supreme Court's door, and Golinski v. OPM, which is similarly on its way — is special because it provides us with the most direct means of clarifying the standard of review for all laws that discriminate on the basis of sexual orientation.

AFTER THE JUMP, I will briefly summarize the Second Circuit argument and explain why this case is so important and where we go from here.

Most legal discussions around DOMA revolve around two questions:

1. What is the appropriate level of scrutiny for laws that discriminate on the basis of sexual orientation, and

2. Given that answer, does DOMA meet the requirements of equal protection and due process.

Notably, DOMA can also be struck down as a gross Congressional overreach, impinging as it does an area of law traditionally and exclusively left to the States. Let's set that argument to the side for the moment and focus on standards of review and equal protection because that is what Mr. Clement, attorneys for the ACLU, and attorneys for the Obama Administration did at the Second Circuit.

Scrutiny, as it is used on constitutional law, is a way of determining how strongly courts will enforce substantive doctrines like equal protection. The more strict the enforcement, the less likely that any law that violates equal protection will survive constitutional challenge. You may ask, at this point, why any law can pass constitutional muster and still be a violation of equal protection. It's quite simple: Most laws classify groups or discriminate in some way, but not all those laws are anathematic to our constitutional tradition. For example, we do not let 12 year-olds vote. Nor do we let them drive cars. We allow this obvious discrimination (on the basis of age) because there are good reasons to do so.

There are three basic standards of review (though one of those can be divided into two): Strict scrutiny is the highest hurdle and it usually applies to laws that separate people on the basis of race. For those laws to survive, they need to be exceedingly exact and incomparably important — the government has to show that the law is "narrowly tailored" to "a compelling state interest." Then there is heightened scrutiny, which lets a few more laws pass through, because the defenders of the law need only show that the law is "substantially" related to an "important" government interest. Lastly, there is rational basis review, where we need only show a law is "rational" and related to a simply "legitimate" government interest. This final category of scrutiny lets more laws survive, but it is by no means an abrogation of the constitutional requirement that laws must still be rational and directly advance a legitimate social goal. 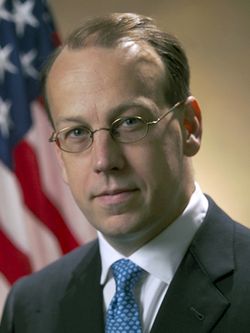 Mr. Clement (left), who is defending DOMA on behalf of the Republican-dominated House of Representatives, has had trouble meeting even that hurdle. But, before we get there, let's discuss how courts determine which level of scrutiny is appropriate. The Second Circuit argument gave us a great lesson in this regard.

Scrutiny levels get bumped up when the victimized group is defined by some immutable characteristic (like skin color) that is also unrelated to the abilities of members of that group to contribute to society. Certain immutable characteristics do indeed impact society, skin color does not. Courts also look to the victimize group's political status — if it is powerless, i.e., usually incapable of redressing legislative wrong in the political process, and victimized by a history of discrimination, the court is more likely to use a form of heightened scrutiny. It is rare that any new classification (other than race, religion, national origin, for example) will get strict scrutiny; there are specific legal and historical reasons for that. So, the debate here is between heightened scrutiny and rational basis.

I have long found these factors instructive, yet far too constraining. Taking the test literally, it carries perverse incentives for minorities: if continued political powerlessness guarantees you more legal protection, there would seem to be little reason to integrate into civil society, for example. Plus, characteristics that are not as immutable as skin color can still carry the social burden of discrimination. The inane, yet somehow ongoing debate about whether sexual orientation is innate or unchanging distracts from the real issue. That is, by virtue of being gay, a singularly core identifying characteristic of gay persons, we are subject to discrimination, stigma, abuse, and the historical baggage of being a hated and despised fringe minority. That social and cultural baggage is what matters for legal protection, not what various people say about when they became a lesbian.

Judicial arguments on this test often center around quantifiable things: Do more openly gay politicians still mean gays are powerless? Are strong gay lobbying groups and a strong ally in the White House evidence that gays are not powerless? What do the studies say about the nature or nurture question on sexual orientation? Notably, because this and other DOMA cases mark the first time the federal government has sided with those gay rights organizations fighting DOMA, the Obama Administration's lawyer had to deal with the seeming paradox: If they have the Obama Administration wholeheartedly on their side fighting DOMA, how can gays be powerless?

Of course, that misses the point. Gays are not only grossly underrepresented in all levels of government and are subject to discriminatory laws on marriage, adoption, benefits, and a host of other areas in most states, but we are also a small minority with a losing streak. Nor would this analysis change if (better: when) we win some or all of the four marriage votes in Washington, Minnesota, Maryland, and Maine. Just because you win one vote doesn't make you King George. Gays will still be subject to discrimination and still the victims of hate, harassment, and violence. We will always be a small minority incapable of even the kind of critical masses of voters enjoyed by the Hispanic and Black communities. We will always qualify for heightened scrutiny.

In the end, though Windsor offers the Second Circuit the opportunity to make its first statement on the level of scrutiny for antigay discrimination, that intermediate question may be irrelevant for DOMA's ultimate death. Mr. Clement rehashed the old arguments for possible legitimate government interests, even falling back on the government's desire to save scarce resources. Even if it were true that letting gay couples receive the same benefits as opposite-sex couples would mean significantly greater expenses for cash-strapped Washington (it is not; the smallness of our numbers makes it minuscule), the desire to save a few dollars has never, by itself, been a sufficient reason for discriminatory classifications. After all, DOMA cannot encourage opposite-sex marriage or so-called "responsible" procreation within marriage; it says nothing about marriage. All it does is prevent legally married gay couples from getting the same marriage benefits as opposite-sex couples. There is nothing rational about that.

The Second Circuit had a front-row seat to that truth and will likely soon decide that DOMA should fall.

The next steps are a little complicated. The Windsor case, while ongoing in the Second Circuit, is also at the Supreme Court waiting for the Justices' decision on review. The Court could take the cases at any time, but will likely not do so until November or December, when Windsor winds its way through the regular channels and the Second Circuit has issued its opinion. The Court may even wait until Golinski does the same in the Ninth Circuit, but the identity of the issues and the unique scrutiny discussion in the Second Circuit may be enough for the Court to combine Gill and Windsor and decide the DOMA issues at once.