Evangelical pastor John McTernan is calling for prayers of repentance and blaming Hurricane Sandy on gays in a rambling blog post: 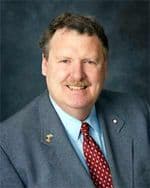 Hurricane Sandy is hitting 21 years to the day of the Perfect Storm of October 20, 1991. I write about this in my book as America Has Done to Israel. This was the day that President George Bush Sr. initiated the Madrid Peace Process to divide the land of Israel, including Jerusalem. America has been under God’s judgment since this event. Both of these hurricanes were cause by freakish weather patterns that came together to create

Twenty-one years breaks down to 7 x 3, which is a significant number with God. Three is perfection as the Godhead is three in one while seven is perfection.

It appears that God gave America 21 years to repent of interfering with His prophetic plan for Israel; however, it has gotten worse under all the presidents and especially Obama. Obama is 100 percent behind the Muslim Brotherhood which has vowed to destroy Israel and take Jerusalem. Both candidates are pro-homosexual and are behind the homosexual agenda. America is under political judgment and the church does not know it!

This monster storm aimed at America and ready to inflict severe damage during election week is not a coincidence. Hurricane Sandy may flood Washington, DC on election day! It is like the hurricane is a huge bucket of vomit in America’s face during the election. What a sign from the holy God of Israel that American politics is an abomination to Him. A pro-homosexual Mormon along with a pro-abortion/homosexual, Muslim Brotherhood promoter, Hard Left Fascist are running for president. And there is no cry of repentance from God’s people! I see this storm as a warning from the LORD to call His church to repentance, This might be the last call from the Holy God of Israel.