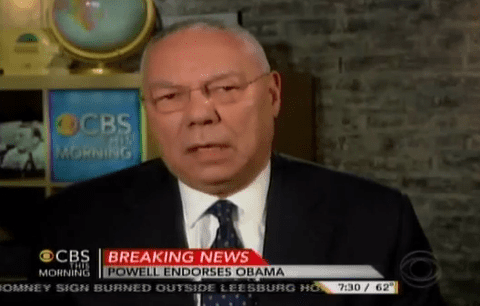 Powell voted for Obama in 2008 but has stayed on the sidelines for the current bout. That changed this morning, when he told CBS News that he plans on going to again cast his ballot for the commander-in-chief. Romney, he says, is offering nothing new or useful in his one area of expertise: the economy.

From the transcript of Powell's remarks to host Charlie Rose:

ROSE: Will you endorse President Obama this race?

POWELL: Well, you know I voted for him in 2008 and I plan to stick with him in 2012, and I’ll be voting for he and for Vice President Joe Biden next month.

ROSE: That's an endorsement for President Obama for re-election?

POWELL: When he took over the country was in very, very difficult straits, we were in one of the worst recessions we had seen in recent times, close to a depression. The fiscal system was collapsing. Wall Street was in chaos. We had 800,000 jobs lost in that first month of the Obama administration and unemployment would peak a few months later at 10%. So we were in real trouble. The auto industry was collapsing. The housing industry was starting to collapse, and we were in very difficult straits. And I saw over the next several years stabilization come back in the financial community, housing is now starting to pick up after four years, it's starting to pick up. Consumer confidence is rising. So I think generally we've come out of the dive and we’re starting to gain altitude. It doesn't mean we are problem solved, there are lots of problems still out there. The unemployment rate is too high. People are still hurting in housing. But I see that we are starting to rise up.

I also saw the President get us out of one war, start to get us out of a second war and did not get us into any new wars. And finally, I think that the actions he's taken with respect to protecting us from terrorism have been very, very solid. And so I think we ought to keep on the track that we are on.

With respect to Governor Romney, I have the utmost respect to him but as I listen to what his proposals are especially with respect to dealing with our most significant issue, the economy, it's essentially let's cut taxes and compensate for that with other things. But that compensation does not cover all of the cuts intended or the new expenses associated with defense.

Watch the video, rapidly and excitedly snipped by the DNC, AFTER THE JUMP.