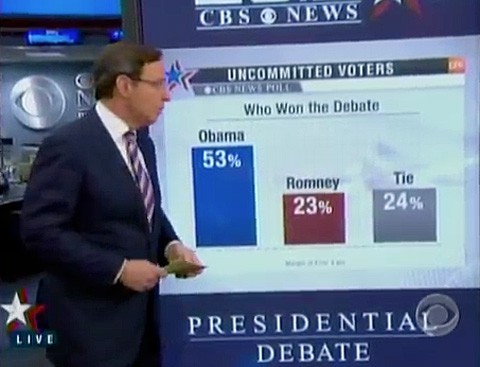 PPP's post-debate polling is out:

PPP's post debate poll in the swing states, conducted on behalf of Americans United for Change, finds that Barack Obama was the big winner in tonight's face off. 53% of those surveyed in Colorado, Florida, Iowa, Michigan, New Hampshire, Nevada, North Carolina, Ohio, Pennsylvania, Virginia, and Wisconsin think Obama was the winner to 42% who pick Romney.

Maybe even more important than the sentiment on who won the debate is who folks in these swing states are planning to vote for now: 51% of them say they're going to support Obama to 45% who stand with Romney. That includes a 46/36 advantage for Obama with independents, and Obama also seems to have made a lot of progress with groups he was previously down by wide margins with. Among men (50/47) and whites (50/46) he is trailing only slightly and with seniors he's actually ahead 52/47.

CBS: "According to a CBS snap poll 53% of uncommitted voters handed the night to Obama, while only 23% said Romney was the winner, and 24% are undecided."

CNN: "Forty-eight percent of registered voters who watched Monday night's third presidential debate say that Obama won the showdown, with 40% saying Romney did the better job in a debate dedicated to foreign policy. The president's eight-point advantage over the former Massachusetts governor came among a debate audience that was slightly more Republican than the country as a whole and is just within the survey's sampling error."