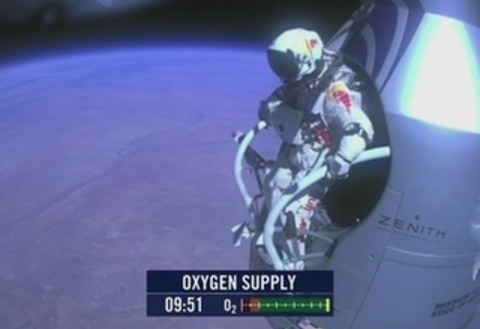 After years of preparation, 43-year old Austrian skydiver Felix Baumgartner met at least one of his goals when he set the record for the highest ever jump today.

Ascending to 128,000 feet above New Mexico, 25,200 feet more than the previous record, Baumgartner hovered at the edge of space before plummeting back to earth, reaching estimated speeds of 706 mph, but it’s unclear whether he indeed broke the sound barrier during his descent. (UPDATE: He did, in fact, break the barrier.)

Now that he’s made headlines around the world, Baumgartner says he plans on taking it relatively easy in the years to come. “This is the end of my journey,” he said. “I’ve always been trying to find my limit, and this pretty much it. For the second half of my life, I want to be a good helicopter pilot. Fight fires. Rescue people. That would be fun.”

Watch video of Baumgartner’s leap AFTER THE JUMP.