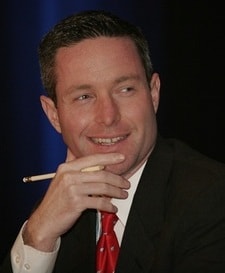 Conservative author Ann Coulter thought herself a laugh riot when she responded to national coming out day with a day of her own, "disown your son day". Most people with common sense found her comment to be deplorable, but not gay GOP activist Chris Barron.

Barron, a cofounder of the group GOProud, said that criticism of Coulter is "laughable". From The Advocate:

Coulter ally and GOProud cofounder Christopher Barron, however, told The Advocate on Wednesday, that GLAAD was overreacting to the author's joke.

He added that he knows Coulter personally, and that she "has been a strong ally of gay conservatives. Indeed, Ann has gone into the lion's den at places like CPAC to make the case that gay people should be welcomed in the conservative movement. The criticism of Ann by an organization like GLAAD is laughable."

Barron criticized the organization for honoring blogger Joe Jervis of JoeMyGod.com after he and GOProud's leaders engaged in a verbal battle in recent years.

"As long as GLAAD thinks that is acceptable they can spare me the trumped-up selective outrage over a joke made by Ann. Putting GLAAD in charge of what passes as acceptable or unacceptable discourse is a little bit like putting a pyromaniac in charge of the fire department.

Yes, because the GOP's moralistic legislation stays away from defining "acceptability."