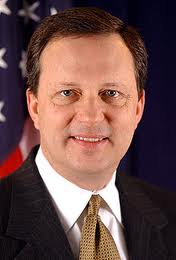 "Here's my concern," Brown says. "People in the northeast are already beginning to blow it off…. [New York City Mayor Michael] Bloomberg has shut down the subway…[launched] evacuations…. I don't object…they should be doing all of that. But in the meantime, various news commentators…[and others] in New York are shrugging their shoulders, saying, 'What's this all about?' It's premature [when] the brunt of the storm won't happen until later this afternoon."

Brown says he understands why the president might have chosen to have a news conference earlier rather than later.

"My guess is, he wants to get ahead of it — he doesn't want anybody to accuse him of not being on top of it or not paying attention or playing politics in the middle of it," he says. "He probably figured Sunday was a good day to do a press conference."

After tamping down his partisan tone Tuesday at an Ohio event that chiefly emphasized victims' relief, Romney planned three full-blown campaign events Wednesday in Florida, the largest competitive state. Sandy largely spared Florida, so Romney calculates he can campaign there without appearing callous.

Obama's revised schedule is a political gamble, too. Rather than use the campaign's final Wednesday to woo voters in tossup states, he will go before cameras with New Jersey's Republican governor, Chris Christie. Christie is one of Romney's most prominent supporters, and a frequent Obama critic. But Christie praised Obama's handling of superstorm Sandy, a political twist the president's visit is sure to underscore.