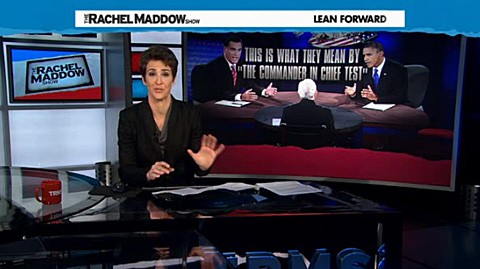 Rachel Maddow says Romney told a lie to donors about Ronald Reagan's presidency to excuse himself for opting out of foreign policy during his administration, and that sends up a huge warning flag.

Some of Romney's foreign policy advisers told the NYT they wonder if he reads their briefings. Rachel says Romney's statements (or lack of them) during Monday night's debate reveal that he would lead us into dangerous George W. Bush-style territory on foreign policy during his administation.

Previous Post: « Tagg Romney Apologized to Obama for Saying He Wanted to ‘Take a Swing’ at Him
Next Post: A Hurricane Headed to the Northeast? »