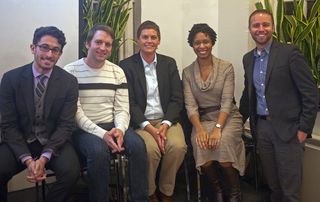 That's a conversation worth having because the reason politics, society, and law matter to each other paves the path ahead for ultimate success in our quest for civil rights. Consider the following case study: If I believe that the courtroom has the inherent advantage of being divorced from politics, where lies, deceit, and a bright white smile can gloss over unrepentant evil, why did I support bringing the ballot initiative in Maine?

Mainers are among the residents of four states who will vote on the freedom to marry this November. In Maryland and Washington, they are voting on whether to retain the civil marriage laws passed by their respective state legislatures, defensive actions to uphold vanguard victories. In Minnesota, they are voting on whether to enshrine marriage discrimination into that state's constitution, a rearguard action. In Maine, voters are being asked to vote again on marriage at the ballot, where marriage equality was previously shot down.

The Maine initiative makes sense because politics can move law. Law, after all, is not some ethereal concept that exists above and outside and prior to our existence; it is written, interpreted, and enforced by men and women, real people with real prejudices, real brains, real fears, and real places in the world. A ballot initiative in Maine in 2012 was the right thing to do at the right time because a favorable trend could give our incomparably hard work the extra boost it needs to win our first state-wide ballot measure. Once that happens, not only is our losing streak over as a practical matter, but our victories can encourage judges to make the right decisions. That means that every call you make, every dollar you donate, and every hour you spend volunteering to help win in at the ballot is also helping us win in the courtroom.

The National Organization for Marriage (NOM) and its allies make much of our inability to win a state-wide marriage measure. "Every time the people are allowed to vote," Brian Brown likes to say, "gay marriage loses." Our political losing streak is a little unfair — we have won the freedom to marry via representative state legislatures — but more importantly, it allows our opponents to couch their discriminatory hopes in the language of democracy and freedom.

A political shift toward greater acceptance of the freedom to marry was necessary. Organizations like Freedom to Marry, Marriage Equality USA, the American Foundation for Equal Rights, and the countless state groups have worked tirelessly since the Defense of Marriage Act was passed in 1996 and especially since the sweep of state marriage discrimination laws in 2004 to change the hearts and minds of Americans who were not so much hostile to marriage freedom as completely unaware of the marriage aspirations of same-sex couples. They have started to succeed by telling personal stories, showcasing not only famous people like Brad Pitt, but telling the real life stories of love, heartache, and hope inside the gay community. This made strategic sense: studies show that the single greatest factor in changing people's minds about gay rights, in general, and specific gay-related legislation, in particular, is knowing someone and relating to someone who is gay, who has felt discrimination at the hands of an old regime.

Given the success of that hearts and minds campaign — not to mention the enormous weight of President Obama's support for every gay rights issue and his clear statement in favor of the freedom to marry — national polls started to show consistent majorities in favor of allowing us to marry. Maine shifted widely from one side to the other, as well, giving us a state with an independent, moderate tradition to put at the vanguard of the question for marriage rights.

If we win in Maine, Maryland, Minnesota, and Washington, we take away Brian Brown's favorite line. We also tell judges that the public is ready to accept their decisions striking down DOMA and enforcing equality in civil marriage. And, that matters. For all our public discussion about the role of judges as "umpires" or neutral arbitrators, judges have the power to do much more than that. They exercise it frequently on both sides of the ideological divide. But although some of the most important cases in our legal tradition — Brown v. Board of Education, for example — preceded the popular will of certain parts of the country, many others — like Grisworld v. Connecticut (legality of contraception) — were finally handed down long after the public had moved on and states stopped enforcing their contraception laws.

Some theorists believe that it shouldn't be this way. Law is the search for truth insulated from politics, which is one of the central reasons why we appoint our federal judges to life terms. But, there is a certain naivete about conceiving of an ideal legal system entirely divorced from the pushes and pulls of real life. As a practical matter, the power of the judiciary is measured in the total tonnage of respect the citizenry has for it. The Supreme Court has no military, no external force that ensures the execution of its decisions. Instead, it trades in prestige, honor, and respect. Going too far afield from a large and passionate portion of the public — as we saw when the Court was deciding the fate of Obamacare — can damage that reputation and damage the judiciary's ability to effectuate change and justice in the future.

In addition to the social cues courts get from public opinion, tradition and custom are everpresent concepts in law. Lawrence v. Texas may have held that tradition alone cannot justify continued discrimination, but many of the justices who signed that opinion are gone and, in any event, tradition has helped justify walls against even incremental change. Four states expressing popular will in favor of marriage freedom changes the tradition quotient: marriage traditions may include only opposite sex couples, but wins in November tell courts that this particular tradition is not worth saving. It is, in other words, a tradition without cultural or legal meaning.