This seems to have been written shortly after her death but Right Wing Watch recently brought it to light. The Family Research Institute speculates a bit about pioneering astronaut Sally Ride's death in July, dragging out the right-wing chestnut that gays die early and applying it to her life. 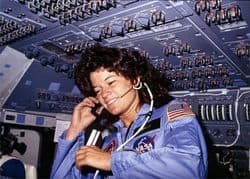 Ride was married to a fellow astronaut from 1982 to 1987. But it was just revealed she had a ‘long time lesbian relationship’ of 27 years. Do the math: her 27 year relationship with a professor of school psychology (and co-founder of Sally Ride’s company) means that she got into that relationship in 1985, smack in the middle of her marriage. It would appear that her childhood friend broke up her marriage.

And Sally may have paid with some of her lifespan. Our latest research into recent homosexual obituaries from San Francisco indicates that lesbians are dying on average around 60ish. Ride fits the pattern of lesbian deaths, but not that of married women’s deaths, which usually extend into the early-to-mid 80s.

Is this proof that homosexual activity leads to an early death? No, of course not. Had she stayed married, Sally Ride might have died at the same age and of the same malady. But, on average, her death fits a consistent pattern suggesting that homosexuality is associated with an early demise.

Ride died of pancreatic cancer. She was 61.

Previous Post: « ‘The Onion’ Takes on the TED Conference: VIDEO
Next Post: Marriage Equality, Law, and Politics: The Battles in Maryland, Minnesota, Washington, and Maine »