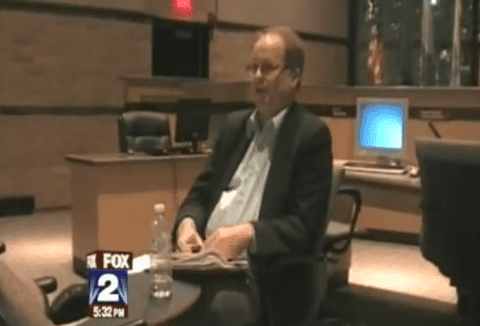 In 2003, Michigan State Representative Tom McMillin told The Detroit News that he believes people choose to be gay and need help. “I think that the people who are caught up in the homosexual lifestyle need help. We encourage people to stop smoking. This resolution is the same sort of thing,” the Republican said. That was six years ago and McMillin’s views haven’t really changed. He still thinks being gay is a choice and that people can choose to be straight.

Asked during a town hall meeting held late last month whether he stands by those comments, McMillin said yes, telling his audience that people can “come out” of homosexuality. “I think that the thousands of people that have been in that lifestyle and come out would say that it was their choice when they were in and came out of the lifestyle,” he said in a comment caught on video included AFTER THE JUMP.

“I think for some it is, it sounds like it,” McMillin said when again asked whether he thinks being gay is a choice. According to The Oakland Press, McMillin cited actresss Anne Heche as an example of someone who “left” homosexuality.

Former Ferndale, Michigan, mayor Craig Covey spoke out against McMillin, saying, “The science says that it is not a choice, but I’ll tell you what is a choice, being a prejudiced person, being a bigot, being anti-gay — that is a choice, and it is a choice that Tom McMillin has made.”

McMillin’s office responded to the video with an email message claiming it is simple a liberal distraction: “A few liberals clearly want to take the focus off what we’ve been accomplishing.”

Watch the video report AFTER THE JUMP.