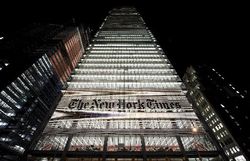 In addition to approving of his handling of the economy, foreign fairs and maintaining a fair, balanced Supreme Court, the paper gives a thumbs up to Obama’s work toward LGBT equality. Mitt Romney’s archaic policies are less-than-admirable, the paper says:

The extraordinary fact of Mr. Obama’s 2008 election did not usher in a
new post-racial era. In fact, the steady undercurrent of racism in
national politics is truly disturbing. Mr. Obama, however, has reversed
Bush administration policies that chipped away at minorities’ voting
rights and has fought laws, like the ones in Arizona, that seek to turn
undocumented immigrants into a class of criminals.

The military’s odious “don’t ask, don’t tell” rule was finally
legislated out of existence, under the Obama administration’s
leadership. There are still big hurdles to equality to be brought down,
including the Defense of Marriage Act, the outrageous federal law that
undermines the rights of gay men and lesbians, even in states that
recognize those rights.

Though it took Mr. Obama some time to do it, he overcame his hesitation
about same-sex marriage and declared his support. That support has
helped spur marriage-equality movements around the country. His Justice
Department has also stopped defending the Defense of Marriage Act
against constitutional challenges.

Mr. Romney opposes same-sex marriage and supports the federal act, which
not only denies federal benefits and recognition to same-sex couples
but allows states to ignore marriages made in other states. His campaign
declared that Mr. Romney would not object if states also banned
adoption by same-sex couples and restricted their rights to hospital
visitation and other privileges.

This endorsement comes as no surprise, but it’s always nice to see arguments laid out so neatly.