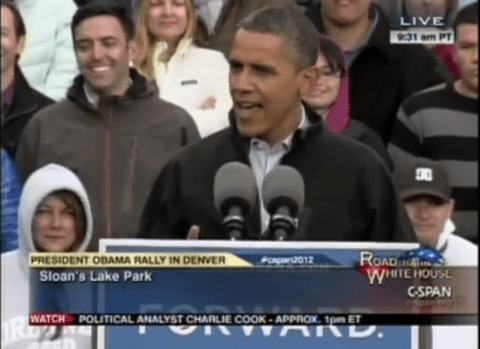 Campaigning in GOP veep candidate Paul Ryan’s home turf of Wisconsin today, President Obama told a gathered crowd that the Mitt Romney he debated last night was a new version of the Republican presidential hopeful. He was a more “spirited fellow” than the real former governor, said Obama in Denver.

“When I got on the stage, I met this very spirited fellow who claimed to be Mitt Romney,” Obama told supporters. “But it couldn’t have been Mitt Romney, because the real Mitt Romney has been running around the country for the last year promising $5 trillion in tax cuts that favor the wealthy. The fellow on stage last night said he didn’t know anything about that.”

So Governor Romney may dance around his positions, but if you want to be president you owe the American people the truth.

Obama’s remarks can be read as a self-defense for what some are calling a poor turn in Denver last night, a way to highlight how Romney “acted,” while Obama wanted to be seen as more grounded and presidential.

The team at Politico thinks Obama’s demeanor was all part of a greater, though not necessarily winning, strategy:

…Obama has never been the nation’s most forceful debater, and he makes no secret of his disdain for the theatrical side of politics. If his conduct on the debate stage with Romney seemed oddly passive, it was in some ways just another manifestation of the president’s restrained approach to communicating with the electorate, whom he seems to believe — in the face of all existing evidence — are not swayed by electoral artifice.

Watch video of Obama’s comments about the “spirited fellow” called Mitt Romney AFTER THE JUMP.

Previous Post: « Anti-Gay Group Knows How To Spoil A Pumpkin
Next Post: Big Bird-Loving Child To Romney: ‘You Find Something Else To Cut Off’ »