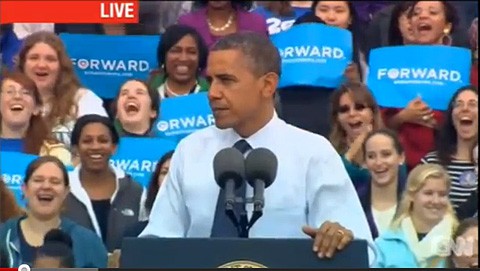 On the campaign trail in Virginia, Obama coins Romney's eleventh-hour shift from being a "severe conservative" to a moderate Mittens:

"We've got to name this condition that he's going through. I think it's called Romnesia. That's what it's called. I think that's what he's going through. Now, I'm not a medical doctor, but i do want to go over the symptoms with you—because i want to make sure nobody else catches it….You know if you say if you're for equal pay, but you can't say if you'll sign a bill for equal pay, you might have Romnesia….If you say you think women should have access to contraceptive care, but you support legislation that would let employers deny contraceptive care, you  might have Romnesia…..If you say you you'll protect a woman's right to choose, but you stand up in a primary debate and say you'd be delighted to ban abortion in all cases, then you definitely have Romnesia. This extends to other issues…If you have Romnesia, here's the good news—Obamacare covers preexisting conditions. We can fix you! We can make you well."

Previous Post: « AFA’s Bryan Fischer Calls CNN ‘The Gay Gestapo’ for Hangin Up on Him: VIDEO
Next Post: Obama Appears on ‘The Daily Show’, Gets Big Ovation for Support for LGBT Rights: VIDEO »