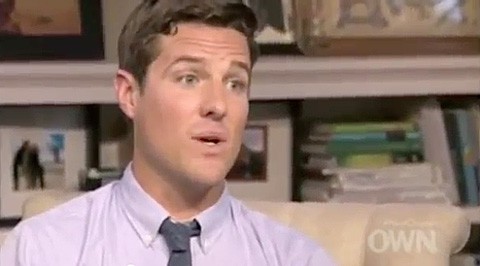 Following the revelation that his group Invisible Children was financially tied to anti-gay Christian fundamentalist groups, KONY 2012 co-founder Jason Russell's personal life came under scrutiny, a scrutinization that was magnified after an apparent mental breakdown, in which he marched back and forth in a nude rant at a California intersection.

Yesterday, Russell appeared on Oprah's Next Chapter to talk about his breakdown. Oprah asked him if he's gay:

“Yeah, I’ve heard those rumors…In the video I was snapping my finger up and down. I grew up in theater. My parents started a large children’s theater organization, so I am animated. I am theatrical. That's me by nature. So when you take me, times it by ten, I don't know what was in my head but it was controlling my body and making me do really strange things."

Russell says he hardly remembers anything about the episode on the sidewalk: "I think I was trying to ask cars to take me to the airport, in my underwear."

Russell says it took him two weeks to come back to himself.

Previous Post: « How Can New Yorkers Help Win the Freedom to Marry in Maine, Maryland, Minnesota, and Washington?
Next Post: Lady Gaga Hurls During ‘Edge of Glory’, Carries On: VIDEO »