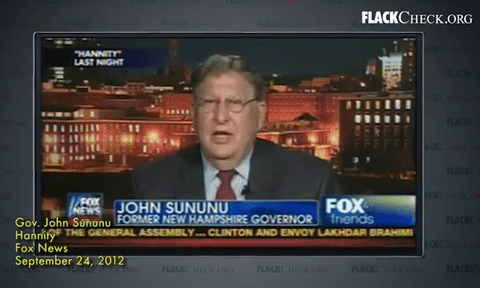 “[The president] revealed his incompetence, how lazy and detached he is, how he has absolutely no idea how serious the economic problems of the country are, and how he has failed to even begin to address them,” Sununu said about Obama’s debate performance. Mitchell gave him an opportunity to clarify his remarks – “Did you really mean to call Barack Obama, the president of the United States, lazy?” — and Sununu doubled-down.

“Yes,” he said. “I think you saw him admit it the night before when he delivered the pizzas [to staff on Monday]. He said, you know, ‘They’re making me do this work.’ He didn’t want to prepare for this debate. He’s lazy and disengaged.”

Watch from today and the Hannity appearance AFTER THE JUMP.