Someone with access to Texas Rangers pitcher Derek Holland's Twitter account tweeted the message "ur a fag" at a heckler on Sunday after the heckler directed a tweet at Holland calling him a "waste of space." 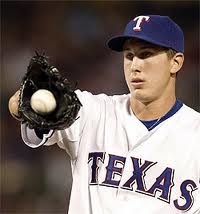 Major League Baseball is investigating the post, which was quickly taken down. Holland, a Newark High School graduate, said Monday in Oakland he was either pitching at the time or in the dugout and he didn’t do it. He added that his fiancée, Lauren, is the only person he knows has access to his account and she told him she was not involved. He also checked with family members, who said they knew nothing about it.

“I honestly don’t know. I know it wasn’t myself,” Holland said. “I’ve talked to my family and my fiancee and they all said the exact same thing: It wasn’t them. I have no idea. All I know is MLB is taking care of it and they’re going to help me out and figure out who it was. I was blindsided by it. I had no idea.”

Texas Rangers general manager Jon Daniels called it unacceptable: "It’s not a term or a sentiment we endorse in any way. We asked Derek about it. He was not aware of it happening. He had been out during the game. We alerted MLB about it so while we’re doing our own investigation they can do one as well. We continue to follow up on that at this time. Derek says he didn’t do it. He’s not sure how it got out, obviously. That’s what we’re looking into.”

Last month Toronto Blue Jays player Yunel Escobar faced a three game suspension and was ordered to pay lost salary to GLAAD and the You Can Play Project, as well as undergo sensitivity training after he took the field wearing an anti-gay slur in his eye black.