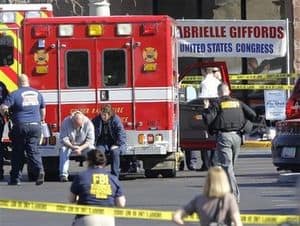 “Gabbie and I are done thinking about you,” said Mark Kelly, the astronaut husband of former Arizona Rep. Gabrielle Giffords, at the sentencing of her shooter, Jared Loughner.

Loughner opened fire at Giffords’ town hall being held at a Safeway in January of 2011, killing six people and wounding 13 others, including Giffords, who is still recovering.

For this heinous crime, Judge Larry Burns sentenced Loughner to seven consecutive life terms in prison plus 140 years. There is no chance for parole.

“He should never get out of prison. I find this is just punishment. He will never have the opportunity to pick up a gun and do this again,” said Burns, who also explained that six of the life sentences represented the six people Loughner killed that day.

Despite Loughner’s mental illness, Mr. Kelly wanted to make one thing clear to the 24-year old: he is guilty. “Though you are mentally ill, you are responsible for the death and hurt you inflicted upon all of us on January 8th of last year. You know this. Gabby and I know this.   Everyone in this courtroom knows this,” said Kelly in his prepared remarks, a copy of which I’ve included AFTER THE JUMP.

Today was the first time victims were able to directly confront Loughner. One of the victims, Rep. Ron Barber, shot in the leg that day and later elected to replace the injured Giffords, told Loughner’s parents, “I and my family hold no animosity toward you.”

He went on to address Loughner himself, “Finally to you, Mr. Loughner. I hold no hatred for you, but I am very angry and sick at heart about what you have done, and the hurt you have caused all of us. You now must bear this burden and never again see the outside of a prison.”

Mr. Loughner, for the first and last time, you are going to hear directly from Gabby and me about what you took away on January 8th, 2011 and, just as important, what you did not. So pay attention.

That bright and chilly Saturday morning, you killed six innocent people. Daughters and sons. Mothers and fathers. Grandparents and friends. They were devoted to their families, their communities, their places of worship.

Gabby would trade her own life to bring back any one of those you savagely murdered on that day. Especially young Christina-Taylor Green, whose high-minded ideas about service and democracy deserved a full life committed to advancing them. Especially 30-year old Gabe Zimmerman, whom Gabby knew well and cherished, and whose love for his family and his fiancee and service to his country were as deep as his loss is tragic. Especially Judge John Roll whom Gabby was honored to call a colleague and friend and from whose interminable dedication to our community and country she gained enormous inspiration. Gabby would give anything to take away the grief you visited upon the Morrises, the Schnecks, and the Stoddards – anything to heal the bodies and psyches of your other victims.

And then there is what you took from Gabby. Her life has been forever changed. Plans she had for our family and her career have been immeasurably altered. Every day is a continuous struggle to do those things she was once so very good at. Gabby is a people person: she exudes kindness, creativity, and compassion. If she were not born with the name – “Gabby” – someone would have given it to her. Now she struggles to deliver each and every sentence. Her gift for language can now only be seen in Internet videos from a more innocent time.

Gabby was an outdoor enthusiast. She was often seen rollerblading with her friend Raoul in Reed Park, hiking in Sabino Canyon, or careening down Rillito Wash Trail on her bike, as she was the night before you tried and failed to murder her. She hasn’t been to any of those places since, and I don’t know when she’ll return.

There’s more. Gabby struggles to walk. Her right arm is paralyzed. She is partially blind. Gabby works harder in one minute of an hour – fighting to make each individual moment count for something – than most of us work in an entire day.

Mr. Loughner, by making death and producing tragedy, you sought to extinguish the beauty of life. To diminish potential. To strain love. And to cancel ideas. You tried to create for all of us a world as dark  and evil as your own.   But know this, and remember it always: You failed.

Your decision to commit cold-blooded mass murder also begs of us to look in the mirror. This horrific act warns us to hold our leaders and ourselves responsible for coming up short when we do, for not having the courage to act when it’s hard, even for possessing the wrong values.

We are a people who can watch a young man like you spiral into murderous rampage without choosing to intervene before it is too late.

We have a political class that is afraid to do something as simple as have a meaningful debate about our gun laws and how they are being enforced. We have representatives who look at gun violence,  not as a problem to solve, but as the white elephant in the room to ignore. As a nation we have repeatedly passed up the opportunity to address this issue. After Columbine; after Virginia Tech; after Tucson and after Aurora we have done nothing.

In this state we have elected officials so feckless in their leadership that they would say, as in the case of Governor Jan Brewer, “I don’t think it has anything to do with the size of the magazine or the caliber of the gun.” She went on and said, “Even if the shooter’s weapon had held fewer bullets, he’d have another gun, maybe. He could have three guns in his pocket” – she said this just one week after a high capacity magazine allowed you to kill six and wound 19 others, before being wrestled to the ground while attempting to reload. Or a state legislature that thought it appropriate to busy itself naming an official Arizona state gun just weeks after this tragedy occurred, instead of doing the work it was elected to do: encourage economic growth, help our returning veterans and fix our education system.

The challenges we face are so great, but the leadership in place is so often lacking. In so many moments, I find myself thinking, “We need Gabby.” In letter after letter, I’ve seen that others agree. As Americans mourned the six who died, they also mourned the loss of a representative who embodied the service they realized they should expect from those they elect, the type of person our county desperately needs to provide leadership and solve problems. Gabby was a courageous member of congress. Willing to stand up to the establishment when the establishment was wrong. She was thirsty for partnership across the aisle and was an unrelenting champion for her 600,000 constituents. One of which was you.

There’s something else Gabby and I have been spending a lot of time thinking about. The way we conduct politics must change. Sure it’s easier to win a debate if you can turn your opponent into a demon, but that’s not how we move forward. Not only does slash and burn politics make Americans cynical about their leaders, but it leads to bad ideas. It creates problems instead of solving the ones we have now.

Even amid all that was lost, Gabby and I give thanks for her life, her spirit, and her intellect, which are a continued force in this world despite what you’ve done. We exalt in sharing our lives with each other and with our family and friends.

As a city, Tucson has grown stronger. We love this community, and we love our neighbors. We are resilient, and the dynamism and compassion of our fellow Tucsonans will continue to push this city forward.

And there is what persists in Gabby: her love for this city, this state and this country. Her commitment to lifting us all up, and her ability to lead. Mr. Loughner, you may have put a bullet through her head, but you haven’t put a dent in her spirit and her commitment to make the world a better place.

Mr. Loughner, pay close attention to this: Though you are mentally ill, you are responsible for the death and hurt you inflicted upon all of us on January 8th of last year. You know this. Gabby and I know this.   Everyone in this courtroom knows this.

You have decades upon decades to contemplate what you did. But after today. After this moment. Here and now. Gabby and I are done thinking about you.

Previous Post: « Your Ears May One Day Be A Battery, Says Science
Next Post: The President-Elect Romney Transition Site That Never Will Be »