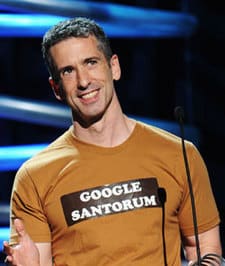 Students and faculty at the University of Madison will be in for a treat next Monday when Dan Savage speaks as part of the Wisconsin school's distinguished lecture series.

In preparation for the event, Savage sat down with Nico Savidge to discuss the current political climate in Wisconsin, how AIDS changed LGBT politics and what it's like to be the man known for two seemingly divergent movements: It Gets Better and the infamous "frothy mix" Santorum definition. To Savage, they're not contradictory at all, because we humans have the amazing capacity to be both serious and silly.

Q: Probably your two best-known projects are It Gets Better and the Santorum definition. Is it strange to you that your most famous endeavors are such a mix of extremely serious and intentionally juvenile?

Savage also told Savidge that even though LGBT activists don't win all of our legislative or electoral fights, the simple act of debating is a move in the right direction. "Just fighting the fight wins for us in the long run, even if we lose at the moment," he said.

As for University of Wisconsin and other colleges, Savage says they have a responsibility to teach students about human sexuality.

"And colleges have this responsibility to provide… this crash course in human
sexuality and good human sexual conduct," he said. Because in a college
environment, having a bunch of kids rattle around without that knowledge
is really dangerous… Behaviors — and bullying is a big thing
for me — behaviors that, in high school, will make you king of the
campus get you expelled in college. … It’s not just the kids that are
being bullied who are going to be destroyed, potentially, by it. It’s
the bullies who will be destroyed by it."