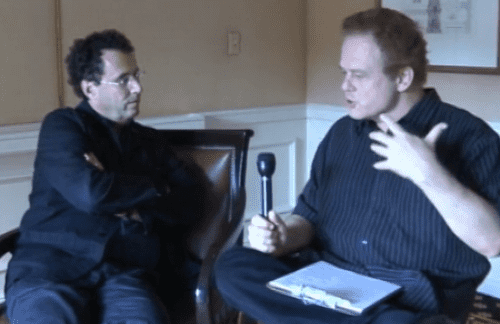 Some are disappointed that Tony Kushner didn’t address rumors that Abraham Lincoln was gay in the screenplay for the new movie Lincoln. While Kushner is well aware of the rumors, and in fact believes there’s some credence to them, he felt the movie should instead focus on a “specific moment” in time.

“I don’t feel that there was any evidence at this particular moment that Lincoln was having sex with anybody,” Kushner tells Tom O’Neil in the video AFTER THE JUMP. “He seems to have not slept and taken no time off during this period …. I don’t say in my movie whether the Lincoln character was gay or straight. You can ask Daniel (Day-Lewis) what he was playing, but it did not seem to me a thing to make a movie about now.”

As for the Lincoln was gay rumors, Kushner said, “I personally believe that there is some reason to speculate that Lincoln might have been bisexual or gay.” One of the reasons is that Lincoln shared a bed with his bodyguard, prompting gossip that the men were involved. But even if Lincoln was indeed playing for the other team, Kushner has no doubt that he and wife Mary Todd were deeply in love.

“These two people loved each other,” said Kushner. “It wouldn’t be the first time that a gay man and a straight woman hooked up and had a great marriage. But I don’t know. I really don’t know.”

Watch Kushner and O’Neill discuss Lincoln’s sexuality and the new movie AFTER THE JUMP.