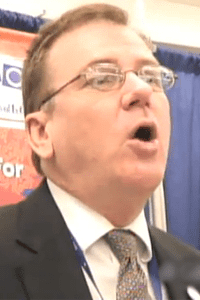 Hot on the heels of the New York Times‘ article on “ex-gay” activists feeling discriminated against, Greg Quinlan, leader of the “ex-gay” group PFOX (Parents and Friends of Ex-Gays & Gays) has penned an op-ed at the right wing LifeSiteNews in which he warns readers of “homofascism”.

He bases his claims on recent victories over religion-based “reparative therapies” that “cure” gay people, like the California law prohibiting shrinks from using the “ex-gay” procedure on minors.

From Quinlan’s op-ed, via ThinkProgress:

The culture war is not slowing down; it’s just beginning to gain steam as gay organizations turn to anti-heterosexual legislation, mandatory public approval of sodomy, federal funding of gay youth activist organizations and homosexual initiatives, required government training against “homophobia,” “heterosexism,” and “transphobia,” etc., etc. This is more than a culture war; it is a war for our very own freedoms—a war for the character and future of our nation.

Homofascism will soon be, if it is not already, the greatest threat to our individual liberties in this country. So-called equality marriage is just the beginning.

He sure has a flair for the dramatic, huh?