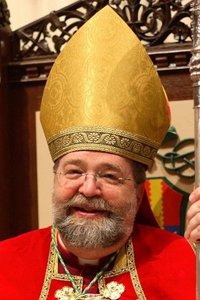 Daniel Jenky, the Bishop of Peoria, Illinois, is ordering priests under his command to read an anti-Obama letter he wrote this Sunday, the final services before next week’s presidential election.

“I require that this letter be personally read by each celebrating priest at each Weekend Mass,” he writes of the letter, which claims that President Obama and his administration’s healthcare laws are an “assault on our religious freedom“.

In the letter, Jenky cautions parishioners that Obama and a majority of U.S. senators will not reconsider the mandate that would require employers, including religious groups, to provide free birth control coverage in their health care plans. “This assault upon our religious freedom is simply without precedent in the American political and legal system,” Jenky wrote.

“Today, Catholic politicians, bureaucrats, and their electoral supporters who callously enable the destruction of innocent human life in the womb also thereby reject Jesus as their Lord,” Jenky added. “They are objectively guilty of grave sin.”

Earlier this year, Jenky delivered a controversial homily criticizing the contraception mandate. The bishop included Obama’s policies in a list of historic challenges the Catholic Church has overcome in previous centuries, including Hitler and Stalin’s campaigns.

Another Catholic leader in Illinois, Vicar General Eric Barr of the Rockford Diocese, claimed Obama is “steamrolling” his religion’s values while arguing for Muslim acceptance.

“Nothing justifies this peculiar and unreal stance of the president,” he said.