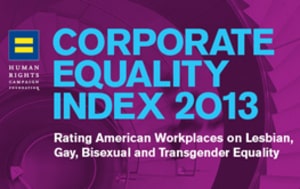 Human Rights Campaign today released their Corporate Equality Index, a rating of the best and worst places for LGBT people to work.

The 11th such report, this year’s edition shows that for the first time in history a majority of Fortune 500 companies offer protections and inclusion for sexual orientation and gender identity. In addition, 54 new businesses opted to take the survey, bringing the total number of participants to 688 companies, with 252 of them being given a perfect 100% rating.

Here are some more findings:

99% of CEI-rated employers provide employment protections on the basis of sexual orientation.

84% of CEI-rated employers provide employment protections on the basis of gender identity or expression — the highest figure to date.

80% of CEI-rated businesses report some form of public engagement with the LGBT community, through marketing, advertising and recruitment efforts, philanthropic contributions to LGBT organizations.

Though these numbers are promising, HRC reminds us that it is still perfectly legal in 29 states for an employee to be dismissed for their sexual orientation and it’s legally a-okay in 32 states for someone to be fired for their gender identity.

You can read a digital version of the CEI AFTER THE JUMP and a PDF can be downloaded via HRC.