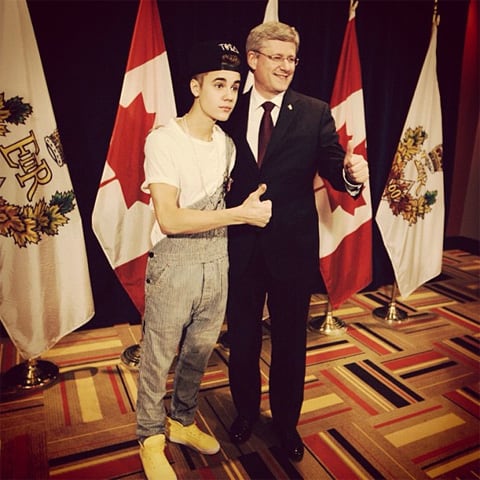 Nobody was happy with Justin Bieber's choice of dress to accept the Queen Elizabeth II Diamond Jubilee Medal from Canadian Prime Minister Stephen Harper over the weekend.

Tweeted Bieber: “I met the Prime Minister in overalls lol"

And Harper showed class in response: “In fairness to @justinbieber, I told him I would be wearing my overalls too.”

Bieber explained later: “The pic of me and the Prime Minister was taken in a room in the arena where i was performing at that day. I walked straight from my meet and greet to him, if you 'Hayley' expect me to have a change of clothes let a loan a suit at that specific time that’s crazy, It wasn’t like it was like I was going into his environment we were at a hockey arena. Wow am i ever white trash hayley peterson lol.”

Previous Post: « DOMA Cited in Decision for SF Gay Couple in Insurance Case
Next Post: What It’s Like to Run Your Fingers Along Matthew Mitcham’s Spine: VIDEO »