No one can fly a plane like Captain Whip (Denzel Washington). Unfortunately no one can drink like him either. Within the first fifteen or so minutes of Flight, the new drama from Robert Zemeckis (of Forrest Gump fame), Whip has already downed multiple vodkas, beers, and at least one line of coke. He's high before lift-off; this bender is all on the morning he's piloting 104 souls on a commercial aircraft to Atlanta.

Captain Whip's flight is, unfortunately, doomed. In the aftermath of the unusual crash (very well shot and edited — a real armrest grabber and apparently it is possible to fly a plane inverted) Whip, his co-workers, multiple lawyers and moneyed executives are engaged in the very tense and very high-stakes legal battle as to the why the plane went down.

"Why?" is an open ended question so let's ask a more specific one. Will Denzel win his sixth Oscar nomination? 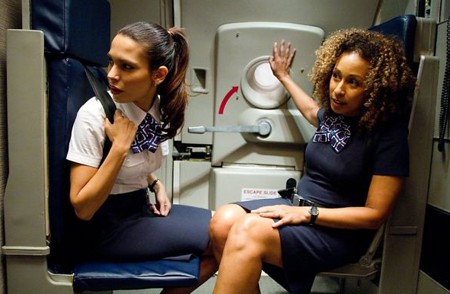 YES. (That was easy… even though the Best Actor race is hotly competitive)

The flight that arguably gives the film its title is over well before the movie is but the showy physical disaster is only the layover. The flight's final destination/disaster is emotional. The title might well refer to this instead, booze and drugs being a popular method of escape. Whip is trouble and not just for himself. He manipulates, challenges and confuses everyone in his circle, a recovering addict named Nicole (Kelly Reilly), his lawyer (Don Cheadle), his union rep (Bruce Greenwood), his co-pilot (Brian Geraghty), and his friend and dealer (John Goodman in a crowd-pleasing turn that might have Oscar dreams of its own). All of these relationships and confrontations give Denzel plenty of room to fill in a superb characterization of an arrogant man and the maddening selfishness of addiction. Alcoholism is a tough subject to convey without stepping in piles of cliché — it's hardly unfamiliar terrain for the movies. But even when Flight underlines a moment too boldly or presents it too simplistically, as in the epilogue, it will still ring true to those who've spent any time with alcoholic loved-ones. 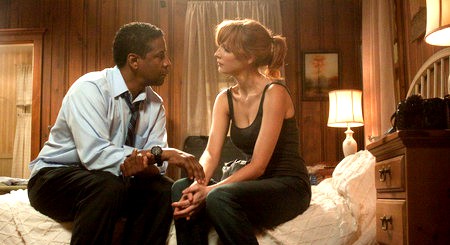 Director Robert Zemeckis has been away from live action cinema for over a decade now after pulling double duty in 2000 (Castaway, What Lies Beneath). He spent the last decade obsessing over motion capture animated features and Flight sometimes has a self-conscious naughtiness to it as if Zemeckis is overcompensating for his family friendly filmography. The  very first scene earns Flight its R rating for nudity and drug use and he doesn't stop there giving more time to Kelly's backstory ('ooh, look a porn set!') or grabby moments ('ha-ha, 'Jesus freaks!,' 'omg, it's Denzel's ass') than seem remotely necessary for the story Flight is telling.

Thankfully Zemeckis's decade away from live action filmmaking has not dulled his instincts with movie stars. His filmography is chalk full of magnetic star turns from Kathleen Turner in Romancing the Stone (1984) all the way through to Tom Hanks in Castaway (2000). Flight is no exception. No one can fly a plane like Captain Whip and only a precious few movie stars can lift-off and keep a movie soaring as well as Denzel Washington. 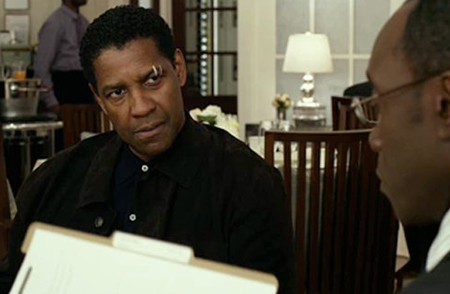