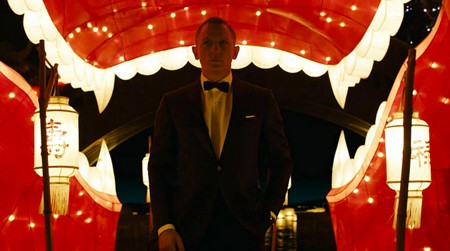 Daniel Craig has returned and will return again as 'Bond, James Bond.' Enjoy him!

SKYFALL arrived on US screens Friday with such multiplex flattening hype that you'd be forgiven for thinking the title literal. The Cubby Broccoli estate, which controls the adventures of the super spy, was pulling no stops for the 50th anniversary installment of the granddaddy of film franchises. We've been inundated with Bond Mania for months now. So you'd think at this point that the actual film would be an afterthought. Not so. 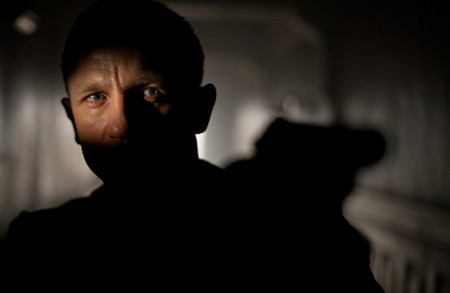 1. Action / Opening Setpiece
Skyfall's pre-title chase, as Bond frantically tries to retrieve a stolen hard drive containing the identities of all of MI6's secret agents, is a real corker. If Skyfall has a significant flaw it might well be that this proves a difficult setpiece to follow. My favorite bit finds Bond dropping into a moving train car he's just demolished with a backhoe. He adjusts his cuffs; why look sloppy when lives are on the line? The scene ends with a very tense "M" (Oscar winner Judi Dench) ordering a kill shot which doesn't go as planned. Bond plummets from the top of a moving train with excruciatingly steep verticality to the water far below and into…

2. Theme Song
…the soundscape of Adele's booming vocals and its accompanying animated title sequence, a theme-song staple. Skyfall is quite literal about its title visually, with daggers or swords falling with Bond into the bottom of the ocean landing like crucifixes to form a makeshift cemetery filled with blood and gunshot wounds. The meaning of the visuals will eventually become clear but that would involve spoilers, which you're not getting here. It's worth noting that Adele's theme song is much better in context than in the vacuum of an mp3.

3. International Villainy
The stolen hard drive traces back, eventually, to the complicated plans but simplistic end goal of Bond's newest villain "Silva" (Javier Bardem) who is obviously targeting "M" and wants to really see her suffer. In the film's most riveting scene, Bond and Silva are face to face, with Bond at a considerable disadvantage in bondage, while Silva taunts Bond and details his M fixation. "Mommy was very very bad," Javier Bardem explains with a hilariously childlike grudge. He's spooky, riveting and eventually moving in the role. It's worth noting that this sequence, the most explicitly homoerotic scene from any Bond film, might well read as homophobically perverse were it not for… 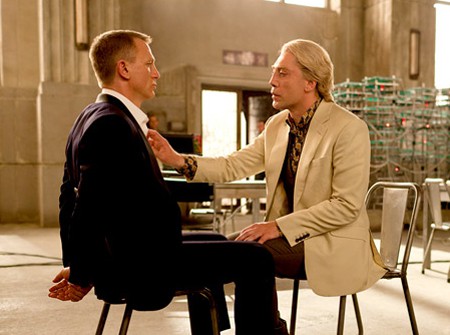 4 …007 Himself
I urge you not to spoil the sequence for friends who haven't yet seen it but Bond's retort to Silva's sexual tease is about the most succinct example yet of how essential Daniel Craig's expert performance has been to the modernization of the series. He's arguably the best thing that happened to the franchise since Sean Connery watched Honey Ryder (Ursula Andress) emerging from the ocean, wet and beautiful, in Dr. No (1962) laying the foundations for it all. It's surely no accident that the franchise confidently announced just as much by putting Bond himself in Honey Ryder's position in Casino Royale in that infamous baby blue speedo.Not for nothing did Daniel Craig first come to critical notice in two very provocative roles as Derek Jacobi's rough trade boyfriend in Love is the Devil (1998) and the randy lover of a senior citizen in The Mother (2003). His polysexual screen persona has blown a hole right in fixed sexuality of the Bond series, making Bond himself somehow less predatory, less sexist and as eroticized as any of his conquests, i.e. the…

5…Bond Girls
Perhaps with Daniel Craig in the mix the notoriously heterosexual Bond series hasn't felt the need to indulge as much in its one undeniable previous camp pleasure, the ritual drag-queen naming of Bond Girls (Pussy Galore, Plenty O'Toole, Strawberry Fields, Octopussy, etc.) which is not to say that the Bond Girls have suffered; Eve (Naomie Harris) and Sévérine (Bérénice Marlohe) both have beautifully handled moments within good scenes that give them plenty to do besides getting Bond off. But the most satisfying subtle detail of Skyfall's screenplay may well be the narrative positioning of "M" as a sort of symbolic Bond Girl. Dench is more central than she's ever been with her "sentimental favorite" James Bond as her devoted protector. They're not fucking but you'd be hard pressed to deny that he loves her. 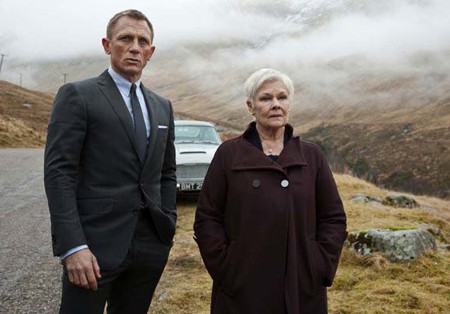 This is all a long way of saying that though there are 23 Bond films there is also only 1 Bond film, each a remix or variation on themes… making the best efforts indispensable (given Bond's stature in popular culture) and the worst skippable. Best and Worst are usually determined by the style with which the key ingredients are handled and Skyfall has that to spare.

If there's a problem with Skyfall it's with its sobriety in both senses of the word. Bond drinks a couple of times and there's an amusing blink and you'll miss it twist on Bond's usual ordering martini sequence, but most of the film's humor is exceedingly subtle like this. Skyfall errs, as so many modern franchises do post Chris Nolan's Batman, on the side of intense self-importance as if to crack a smile would be to invite dismissal as "mere popcorn entertainment." What's wrong with slightly inebriated popcorn entertainment?

One final note: Craig's ongoing superb rendition of 007 was not quite enough to save Quantum of Solace from itself. So the filmmakers wisely pull out all the stops here. If Skyfall lacks the element of surprise and revitalizing electricity of Casino Royale it leans hard on Craig's gifts and assembles the most remarkable group of talented craftsmen than a Bond film has ever known: the legendary cinematography Roger Deakins makes this the most beautiful of all Bond films and superbly visualizes its constant references to espionage as a life in the shadows; Sam Mendes (American Beauty) may well be the most acclaimed director ever handed a Bond film and his technical team from editors to sound engineers do fine work; the actors too are an incredible mix… if Oscar winner Javier Bardem doesn't quite steal the film it's only because Skyfall has assembled the most lauded acting troupe that 007 has ever seen. You can't entirely steal a picture when rising stars Naomie Harris and Ben Whishaw, Oscar nominees Ralph Fiennes and Albert Finney, and Oscar winner Judi Dench all stand in your way.

Even if you could, you'd still have Daniel Craig and Daniel Craig's Speedo to contend with. 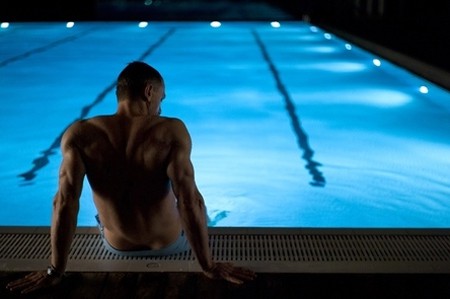