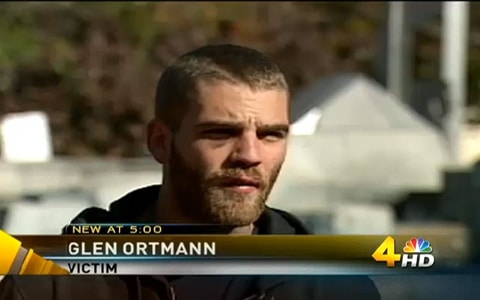 Glen Ortmann, a homeless man in Murfreesboro, Tennessee, says he was beaten unconscious in a homophobic assault in a homeless camp in the woods referred to as Tent City, NBC 4 reports:

“It makes it 10 times harder when you’re gay and homeless at the same time,” Ortmann said. Ortmann said over the weekend he walked right into a trap after recently revealing he’s gay. “It was a big crowd, and all I remembered really is being hit once or twice and being knocked out cold,” Ortmann said.

His right eye was swollen shut. He also suffered a busted lip and a badly bruised nose. His entire body was filled with pain. “I was sore,” he said. “My head was mainly sore from the beating I took.”

The homeless man said he has no doubt in his mind he was targeted by the other homeless people at the camp because of his alternative lifestyle. “I was beat up because I was gay,” Ortmann said. “It’s considered a hate crime. It’s against the law to put your hands on someone to begin with.”

Ortmann has been homeless for two months, and must remain at Tent City because he has nowhere to go, fearing for his life, he says, and constantly having to look over his shoulder. Police are supposedly investigating a couple names as possible leads in the case.

Watch NBC4’s report, AFTER THE JUMP…