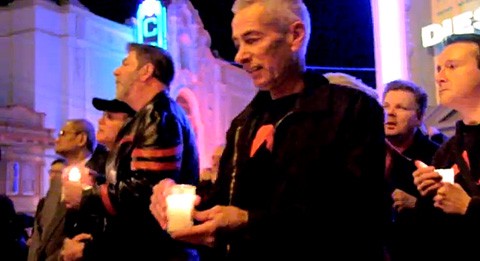 As many of you know, yesterday was the anniversary of Harvey Milk's assassination 34 years ago. Last night there was a candelit vigil to mark it in San Francisco's Castro district. Activist and videographer Sean Chapin sent along a touching video about his legacy.

The video follows an original chorus member (Robert Rufo) who was at the chorus' first-ever public appearance, which was at the candlelight vigil on the steps of City Hall the night when Harvey Milk was assassinated.  Robert Rufo remembers what it was like that night, and how the chorus has been living the legacy of Harvey Milk since then over the last 34 years.  The video shows Robert Rufo and the SF Gay Men's Chorus sining at the 34th anniversary memorial service and marching with candles to the Castro.