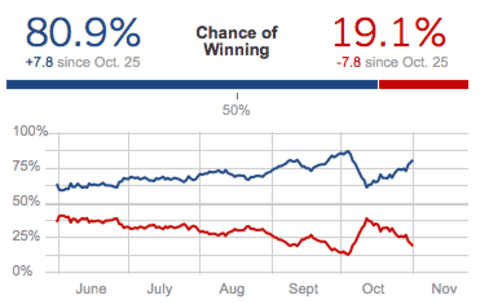 According to Silver's probability calculations, Obama will claim 303.4 electoral votes, far over the 270 needed to win; Romney, according to this calculation, only gets 234.6 such votes.

If Obama wins, it will be the second presidential election that Silver has correctly called, and it could also mean that Joe Scarborough gives $1,000 to charity. That is, if Scarborough took Silver's bet, a bet that has already earned the ire of the Times' public editor. An excerpt from Margaret Sullivans' excoriating criticism:

Whatever the motivation behind it, the
wager offer is a bad idea – giving ammunition to the critics who want
to paint Mr. Silver as a partisan who is trying to sway the outcome.
It’s also inappropriate for a Times journalist, which is how Mr. Silver
is seen by the public even though he’s not a regular staff member.

ranted, Mr. Silver isn’t covering the
presidential race as a political reporter would. But he is closely
associated with The Times and its journalism – in fact, he’s probably
(and please know that I use the p-word loosely) its most high-profile
writer at this particular moment. When he came to work at The Times, Mr.
Silver gained a lot more visibility and the credibility associated with
a prominent institution. But he lost something, too: the right to act
like a free agent with responsibilities to nobody’s standards but his
own.