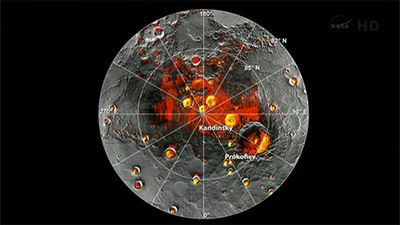 PHOTO OF THE DAY: There is water ice on Mercury.

The Supreme Court did not release a decision today regarding DOMA and Prop 8 cases as was hoped. We still may hear from them Monday morning though. Staying on the marriage equality front, there was very troubling news out of Nevada late yesterday where a federal judge (a Bush appointee) upheld the state's law limiting marriage to between a man and a woman. Also Stephen Colbert takes a look at the repercussions of Boeing denying equal pensions to gay couples.

In recognition of tomorrow's World AIDS Day, gay hook-up site Manhunt will be promoting a drug which is said to reduce the risk of HIV infection. J Crew recognized marriage equality for the first time on its website, featuring a gay couple in its "Wedding Album".

Mallory Owens, the Alabama woman who was attacked on Thanksgiving by her girlfriend's brother, has released a statement in which she says she fears for her life. And the NFL has decided not to discipline Tank Carder for his series of homophobic tweets.

Last night Glee went all "Scissor Sisters" on everyone with a little Sarah Jessica Parker thrown in. That is a whole lotta gayness in one room. And Andy Cohen recently headed out for open waters to try to hook a big one.

Also Girls is back!

Jon Stewart gives his take on the awkwardness of the Romney/Obama White House lunch date. While the President was lunching, the First Dog was making sure Christmas decorations were perfect.