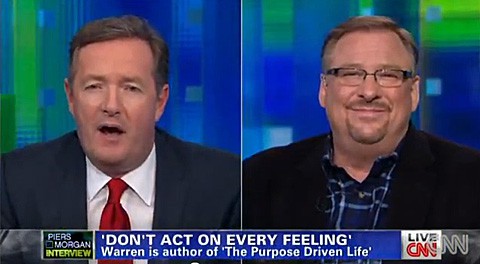 Megachurch pastor Rick Warren appeared on Piers Morgan's CNN show last night where he was asked about his attitude toward homosexuality, which he compared to an urge like wanting to punch somebody in the face.

Here’s what we know about life. I have all kinds of natural feelings in my life and it doesn’t necessarily mean that I should act on every feeling. Sometimes I get angry and I feel like punching a guy in the nose. It doesn’t mean I act on it. Sometimes I feel attracted to women who are not my wife. I don’t act on it. Just because I have a feeling doesn’t make it right. Not everything natural is good for me. Arsenic is natural.

Previous Post: « FOX News’ Commentator Dr. Keith Ablow Not Surprisingly Calls a Mom ‘Nuts’ for Giving a Doll to a Boy: VIDEO
Next Post: Gay Wedding Video of the Day: Tony and Kevin »