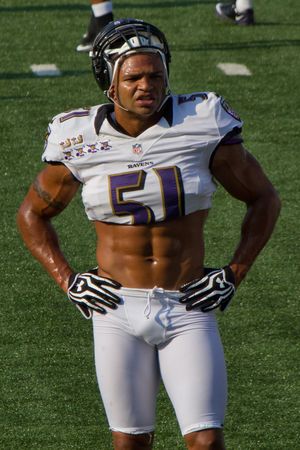 Brendon Ayanbadejo, the Baltimore Ravens linebacker who became one of the sport's most vocal supporters of marriage equality this year, was asked by Fox Sport's Alex Marvez whether when he thinks an NFL player will come out while still playing the field.

Basically, Ayanbadejo's not sure, mostly because he thinks there's a far lower percentage of gay people among players than among the general population.

Regardless of when this hypothetical player comes out, though, Ayanbadejo's convinced he'll be able to make some serious cash selling his story.

The transcript, via Outsports:

Marvez: …How long do you think it will be until the first active gay NFL player emerges?

Ayanbadejo: That's a good question. I don't know. I have a whole theory that some people would believe is kind of counterintuitive to a lot of stuff that I preach about LGBT rights. In no way am I trying to offend the LGBT community. But my theory after playing in the NFL for so long is that there are certain traits NFL players have and don’t have.

Now, if there's a negative thing about NFL players, we tend to be angrier (than non-players). We clearly have higher testosterone because you have to genetically to play this game. With that comes bipolar (disorder), split personality and certain negative things. That’s not everybody, but I think the rate is higher than the general population.

I believe that there are not as many gay people in the NFL as in the regular population. This is a discussion I’ve been having on Twitter for quite some time now. Some people say, "You're stupid." But even though there is not yet a proven gay gene, I believe people are born gay. It is a natural phenomenon.

There are definitely gay players in the NFL. I'm not saying that there are not. Some people say the gay guys in the NFL aren't coming out because they're scared and worried about what’s going to happen to their careers. But I think the first person who comes out and says they are gay, everyone is going to write a book and do stories about them. They're going to make a lot more money by saying they're gay than by not saying they’re gay. But are we ready to hear that? Is that person going to be comfortable to do that? I don’t think they are right now because of society and the way things are.

Eventually, I think there will be someone. But the number (of gay players) is so minute. If they say the regular population is 7 to 9 percent (LGBT), in the NFL it might be 3 percent. I could be completely wrong, but I've played for so long and so many others have. When you hear players coming out that are retired, they are few and far between. Why wouldn’t we hear about more players if it's the same percentage like in the regular population?

What I'm saying is controversial. There is no proof. It's just my theory.

Previous Post: « ‘Rescue Me’ Singer Fontella Bass Has Died
Next Post: A New Year’s Reflection on the Fight for Full Equality »