Back in September, Brandon posted about  Roger Jean-Claude Mbede, a Cameroonian man jailed for texting a man a photo of himself holding a sign which read "I'm very much in love w/u." 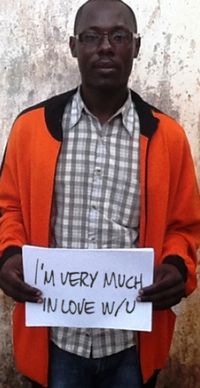 Mbede has since been incarcerated in Kondengui Central Prison.

In September, Representatives from Alternatives Cameroon visited Mbede in Kondengui, where they found him in "deplorable" moral and physical health:

Suffering at the time with his left eye and without treatment or medications. He told us he slept on the ground since his imprisonment, and abandoned by most of his family members who regard him as a wizard.

Today, a Cameroonian court upheld his conviction for homosexual conduct, the AP reports:

The Court of Appeal ruled early Monday that Jean-Claude Roger Mbede, 32, must serve out his three-year jail term. He was provisionally released on bail in July after spending a year and a half behind bars. Mbede told The Associated Press he's not sure he can put up with the anti-gay attacks and harassment he faced from fellow inmates and prison authorities.

Gay rights activists say the upheld sentence marks yet another setback for gays and lesbians in Cameroon, widely viewed as the most repressive in Africa when it comes to prosecuting same-sex couples.

The activist group AllOut has an ongoing petition to free Mbede, which can be found here.