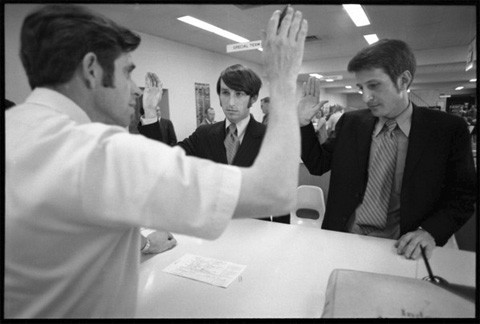 The AP profiles Mike McConnell, left, and Jack Baker, who tried to obtain a Hennepin County marriage license in Minneapolis in May 1970, and challenged it in court:

The high court in October 1972 declined to hear arguments in Baker v. Nelson, rejecting it in a one-sentence dismissal “for want of a substantial federal question.” Now, in taking up the dispute over the California constitutional amendment banning gay marriage, the court may confront the issue of whether the U.S. Constitution forbids states from defining marriage as the union of a man and a woman.

Baker and McConnell are still together today:

Forty years after they appeared in a “Look” magazine spread and on “The Phil Donahue Show,” Baker and McConnell have retreated from public life. The men, both 70, live in a quiet, nondescript south Minneapolis neighborhood. McConnell recently retired after a long career with the Hennepin County library system. Baker, a longtime attorney who ran unsuccessfully for Minneapolis City Council and a judgeship in the years after they pursued a marriage license, is mostly retired as well. Their case is no longer widely recalled in Minnesota, and the couple has mostly withdrawn from open activism, although the two men are working on a book about their lives…

…Asked via email why they pursued the case, Baker wrote, “The love of my life insisted on it.”

Minn. gay couple, who fought for legal right to marry in early ‘70s, still together [ap]