On Friday I wrote this: 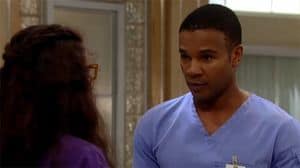 General Hospital debuted a new character this week, a gay nurse played by actor Marc Anthony Samuel. To establish his character as gay, his first scenes involved him pulling out a tube of lipstick and offering to touch up a heterosexual woman. Oy.

In fairness to Ron Carlivati, who created the character, I'm reposting a note he left in the comments of the post, which has sparked a very robust back-and-forth discussion.

To Andy Towle and the readers of this blog: My name is Ron Carlivati and I am the Head Writer of General Hospital. I am also an openly gay man. I created the character of Felix Dubois, the "lipstick-wielding gay male nurse," and I am frankly appalled by the intolerance and internalized homophobia expressed in this post and in the majority of its comments. During my career, I have brought no fewer than six gay characters to daytime television: male, female, Black, White, Hispanic…all shapes and sizes. I have written coming out stories, gay bashing stories, gay marriage stories, gay parenting stories and gay love stories. I wrote the first love scene between two gay men that ever aired on daytime TV. I won a GLADD award for these stories. What exactly is it about this character that is causing such righteous indignation? The fact that he carries a tube of lipstick in his scrubs? SPOILER ALERT: Felix sells cosmetics to put himself through nursing school. This will be revealed on Monday's show. Not because I think gay men love lipstick, and certainly not to "establish" himself as gay. But even if that were the reason, so what? Does this make him too queeny? Not straight-acting enough? Is that the only type of gay character allowed on TV now? As far as I'm concerned, to be offended by this character is what is offensive. And just FYI, the majority of women (our core audience) I have heard from thus far about Felix have expressed to me how much they like him. The only people who seem to have a problem with him are certain gay men who are apparently afraid of a gay character who might be portrayed as a little bit effeminate. Well, I say shame on you, and shame on Andy Towle, too. Oy, indeed.

Mr. Carlivati also includes a few follow-up responses as the comment thread develops, which you can read there.

There's no question in my mind that Mr. Carlivati should be allowed the chance to develop his character more fully before judgment is passed and I regret if my commentary suggested that it should. My expression of "oy" over what I perceived to be a stereotype may have been hasty, but was also informed by having written this site for 9 years and seeing more than a few damaging caricatures in television and movies along the way.

I've also reported very positively on other soap characters written by Mr. Carlivati. I'm looking forward to seeing how his Felix Dubois character develops and thank him for his remarks and reaction.