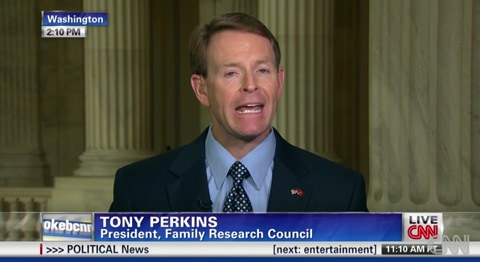 Equality Matters has an excellent and alarming report on cable news appearances by Tony Perkins, President of the rabidly anti-gay Family Research Council, whose group has been designated a "hate group" by the Southern Poverty Law Center. 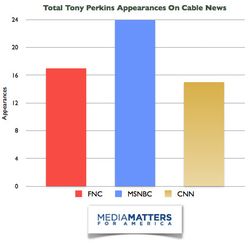 Despite this designation, Perkins was invited to appear on cable networks a total of 56 times as a credible spokesperson for social conservatives and evangelicals during the GOP primary. Not once did any of the networks mention that Perkins is the leader of a designated hate group.

"These numbers don’t include appearances that weren't related to the presidential election, like a CNN segment discussing what Jesus Christ would have thought about Occupy Wall Street. The results also don’t include the number of times the networks referenced or discussed Perkins’ election commentary without actually hosting him on air. CNN alone did this 31 times during the primary."

The bulk of Perkins' appearances occurred on MSNBC.

Despite the fact that the FRC has ties to white supremacist groups like the KKK, Perkins was touted, even praised, Equality Matters adds:

After the Iowa caucus, Fox’s Mike Huckabee called FRC “one of the most respected family organizations in America” and lauded Perkins for his “clear understanding, not only of Iowa, but of the process nationally.” Fox host Megyn Kelly called him one of the country’s “top family values conservatives.”

Perkins received similar treatment on MSNBC, where host Chris Matthews praised him for being an “honest conservative,” and stated “I find him fascinating because I do trust him.”

As the networks continue to cover the FRC’s annual Values Voter Summit without noting its association with extreme anti-gay hate groups, it is clear that Perkins has become a major player within the GOP.