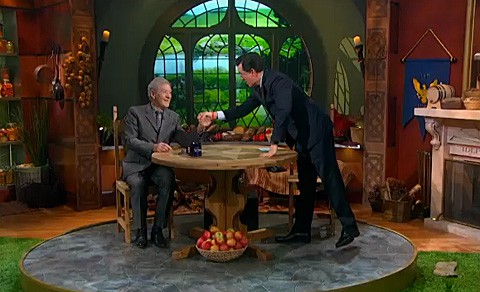 Stephen Colbert interviewed Sir Ian McKellen alst night and told him that he has a problem with McKellen's gay rights advocacy.

"Here's my beef with you…You don't just make gay seem acceptable…You make it seem heroic. Are you the sharp knifepoint of the gay agenda trying to brainwash our children?"

McKellen says there's a Hobbit sequel in the works called Gandalf the Gay in which he reveals his favorite dwarf. He also reveals who would win in a battle between Gandalf and Magneto.