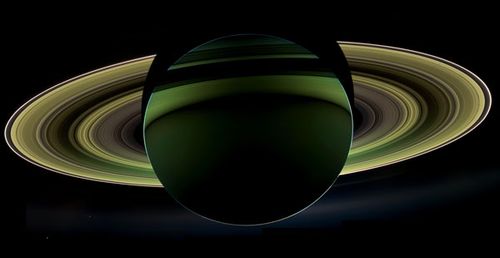 NASA has released a new image of Saturn shot by its Cassini spacecraft, New Scientist reports:

As well as providing a unique view of an already enchanting world, the image reveals details in the rings that aren't easily seen in direct sunlight. The picture is a composite of infrared, red and violet-spectrum photos taken by Cassini in October and released this week.

The last opportunity for Cassini to spot Saturn from this angle was in 2006, when NASA created a mosaic of images that revealed previously unknown faint rings around the planet.

The two tiny dots in the lower left-hand quarter of the photo are two of Saturn's moons, Enceladus and Tethys. Enceladus is closer to the rings; Tethys is below and to the left. Previous Cassini fly-bys discovered that Enceladus is a geologist's paradise of snaking ridges, chasms and scratches, while Tethys hosts a mysterious spear-shaped feature.

In other space news, a habitable planet has been discovered orbiting a nearby star:

The world is one of five thought to be circling Tau Ceti, a star just 12 light years away that is almost identical to the sun.

Astronomers estimate the Tau Ceti planets to be two to six times bigger than Earth. One of them, with five times the Earth's mass, lies in the star's "habitable zone".

Also known as the "Goldilocks zone", this is the orbital region that is neither too hot nor too cold to allow liquid surface water and, potentially, life. Details of the discovery are to appear in the journal Astronomy & Astrophysics.

Previous Post: « George Takei Will Help You Come Out to Your Family Over the Holidays: VIDEO
Next Post: Russian Police Detain Protesters After Scuffle During Protest Against Ban on ‘Gay Propaganda’: VIDEO »