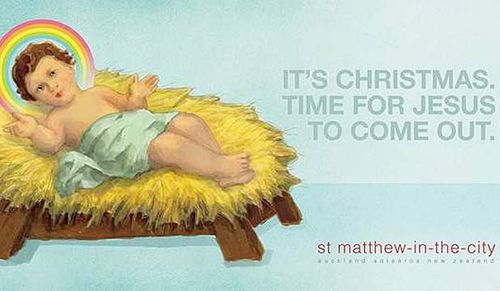 New Zealand church St. Matthew's in Auckland, New Zealand, also known as St. Matthew-in-the-City, is celebrating the holidays with this billboard, which reads, "It's Christmas. Time for Jesus to come out."

According to the church's Reverend, Glynn Card, the billboard's meant to make believers, particularly those who are anti-gay, ask themselves whether the Christian messiah's message would be hampered by potential same-sex desire.

Reverend Glynn Cardy said the sign was about trying to lift the humanity of Jesus.

"The fact is we don't know what his sexual orientation was."

While some conservative Christians might point to the more
absolutist parts of the Old Testament as proof of the Messiah's sexual
preferences, Cardy said that homosexuality was not even a word until the
19th century. Any mention of it would therefore have been a
mistranslation.

More importantly the billboard was meant to ask whether Jesus'
desires in the bedroom would make a difference for those of faith.

"Would it make a difference if he was gay? Would that change the
picture for you? Would it mean what we revere about him changes?"

You may remember Cardy and Auckland-based St. Matthew's from when their "Gaydar" billboard, meant to protest homophobia within the Anglican Communion, was vandalized a few years back.