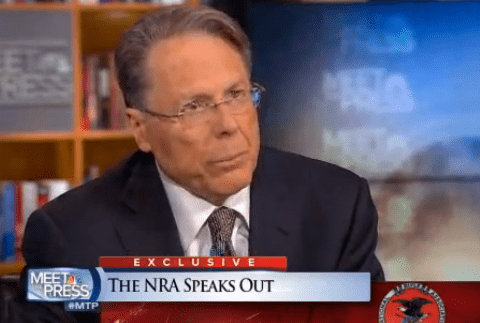 Wayne LaPierre guaranteed the NRA a place on the fringe today.

After two days of outrage over the NRA leader’s assertion that we need more guns in schools to stop another Sandy Hook-type massacre, LaPierre went on Meet the Press not to amend his statement or take a softer tone. No, he appeared today to make similar claims, even as host David Gregory, growing increasingly flabbergasted by LaPierre’s defiant gun worship, gave him plenty of opportunities to introduce some humanity into his argument.

Mediaite summarizes one of their more tense exchanges, when LaPierre equated gun controls with morality laws and disagreed that removing assault weapons from streets would save lives.

After pressing LaPierre further on why he is unwilling to concede gun control measures as one part of the potential solution, the NRA leader responded, “you can’t legislate morality … legislation works on the law-abiding, it doesn’t work on criminals.”

“If it’s possible to reduce the loss of life, you’re willing to try [gun control]?” Gregory repeatedly asked before holding up a high-capacity magazine of ammunition. “Isn’t it possible that if we got rid of these … isn’t it just possible that we could reduce the carnage in a situation like New Haven?” Gregory pushed.

“I don’t think that’s going to make one difference,” LaPierre answered. “There are so many ways to evade that.” Unconvinced, Gregory hammered LaPierre over his evasiveness on the subject, demanding to know whether he’d be willing to try such restrictions if, by his own logic, it could possibly save more lives.

“I don’t buy your argument one bit,” LaPierre said.

It’s truly incredible: over the span of three days, LaPierre took his group, one of the most respected, powerful and sought after voices in gun politics and turned it into a shrieking, raging outlier.

Oh, as for those New York Post and New York Daily News headlines labeling him a “gun nut” and “crazy,” LaPierre had this to say, “If it’s crazy to call for putting armed police in our schools to protect our children, then call me crazy.” As you wish.

Watch video of LaPierre’s entire Meet the Press interview AFTER THE JUMP.