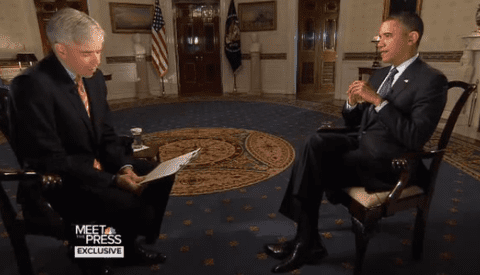 In a Meet the Press interview centered largely on the so-called fiscal cliff and the GOP’s obstructionism, President Obama was asked whether potential Defense Secretary nominee Chuck Hagel’s decades-old comments degrading gay people should disqualify the former senator from filling the cabinet position.

Obviously Obama, the man whose consideration of Hagel started this whole thing, said no, telling host David Gregory that Hagel’s a “patriot” who has done “extraordinary work” in the Senate and “served our country with valor” during Vietnam.

Obama also said Hagel’s apology shows that the former Republican Senator and our country have experienced a “positive change” about gays and lesbians serving in the army.

“I’ve served with Chuck Hagel. I know him. He is a patriot. He is somebody who has done extraordinary work both in the United States Senate, somebody who served this country with valor in Vietnam, and is somebody who’s currently serving on my Intelligence Advisory Board and doing an outstanding job,” said the president before specifically zeroing in on Hagel’s past comment that being gay is an “inhibiting factor” for a potential ambassador.

“With respect to the particular comment that you quoted, he apologized for it,” he said. “It’s a testimony to what has been a positive change over the last decade in terms of people’s attitudes about gays and lesbians serving our country, and that’s something that I’m very proud to have led. And I think that anybody who serves in my administration understands my attitude and position on those issues.”

Watch President Obama offer his thoughts on Chuck Hagel AFTER THE JUMP.