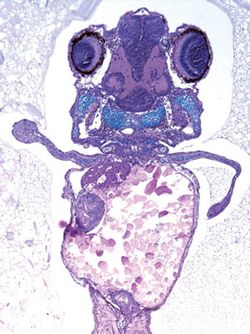 New research from the Spanish National Research Council provides more information about how our arms and legs developed from fins.

Basically, tetrapods like humans and cows have a gene, called the hoxd13 gene, that produces a protein that leads to the growth of limbs, something they proved by using not guinea pigs, but zebrafish embryos.

Fernando Casares of the Spanish National Research Council and his colleagues injected zebrafish with the hoxd13 gene from a mouse.

…Casares and his colleagues hoped that by injecting extra copies of the gene into the zebrafish embryos, some of their cells would make more of the protein.

One full day later, all of those fish whose cells had taken up the gene began to develop autopods instead of fins. They carried on growing for four days but then died.

Zebrafish are a common test animal in such procedures. They’re also being used by doctors at Duke University Medical Center for stem cell research on how to regenerate heart and brain tissue. They posted a video about it on YouTube last week.