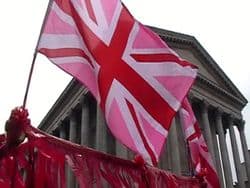 In a letter published in the Sunday Telegraph, the group wrote, "Marriage should be open to all, regardless of sexuality."

“We recognize that civil partnerships were an important step forward in giving legal recognition to same sex couples. But civil partnerships are not marriages, which express a particular and universally understood commitment," said the Tory leaders.

Nick Herbert, the openly gay former police minister who brought the group together, also penned his own op-ed today saying his party must learn from the American Republicans: alienating LGBT people and their allies brings nothing but electoral gloom.

As the Republicans found in the recent presidential elections, there is no mileage in alienating the new generation of voters or what is, even in the United States, a growing majority of public opinion. President Obama endorsed gay marriage and was re-elected. So, in London, was Boris Johnson.

Winning politicians who have built the broad base of voter support that is needed to gain office have got themselves on the right side of this argument. It is not gay marriage which will cost Conservatives votes: it is failing to win the common ground.

Cameron said the legislation will be introduced in 2013, meaning the England may see same-sex marriages by 2014.

Previous Post: « Same-Sex Couples Begin Marrying In Washington State
Next Post: Malawian Jailed For 2010 Gay Wedding: ‘I Have No Regrets’ »