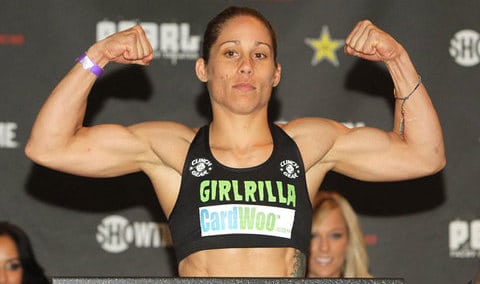 "It takes a brave person to come out," said UFC President Dana White yesterday while praising Liz Carmouche, a female fighter who recently said she's a lesbian, the first time a gay person has come out in the violent sport in which homophobia has historically been celebrated. (White recently said that his only career regret is releasing a video in which he used the term "faggots".)

Going on about Carmouch, White said:

I love what she did. I know I have the big ‘homophobe' persona and people think I'm some homophobe. I'm the furthest thing from it. I think it's ridiculous it's 2013 and the government tells two people they can't marry each other. Who is the government to tell two people who say they love each other they can't be married? It's ridiculous.
…
I applaud that she came out and that she's the first one. Good for her. I hope more do. It doesn't bother me one bit. Shouldn't bother anyone else either.

Carmouche is currently prepping for a February fight against Ronda Rousey for the UFC's first female contention. Unlike some people, Rousey insists she's not going to try any mind games to psyche her opponent out. She wants to keep things as positive as possible.

"Because it's a first-time event, because the first time for women to fight on a UFC card, and she's the first openly gay fighter, it doesn't need to be any squabbling or argument," said Rousey. "It's an extraordinarily positive thing, we don't need an argument to push it. It's a positive event and I don't mind there being no arguments. It sells itself. It's history."