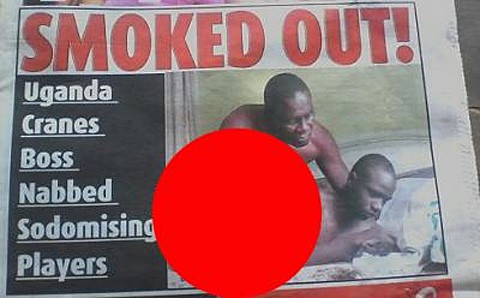 As parliament mulls the so-called "kill the gays" bill, a Ugandan tabloid has amped up the moral outrage against gays by printing a series of photos of the head of the Ugandan Cranes football team allegedly "sodomizing" a player, Gay Star News reports:

The photos detailed the alleged sexual acts with captions designed to outrage the country’s conservative population: ‘MASTER AT WORK: Mubiru nails the boys butt’, ‘shafting’ and ‘hurting the boy’, to finally ‘END GAME: The boy struggles to stand up after the bum shattering session.’

The alleged ‘young player’ was not identified nor could the validity of the pictures be ascertained.

No statement has been issued by the Crane’s football team at the time of publishing this story.

Speaking with Gay Star News, Denis Nizoka, editor of Identity Kenya said: ‘This was clearly designed to provoke a moral outrage about what is seen as a bastion of male sportsmanship – the country’s top football team.'

This is the same tabloid which in 2006 published a list of names of alleged homosexuals.