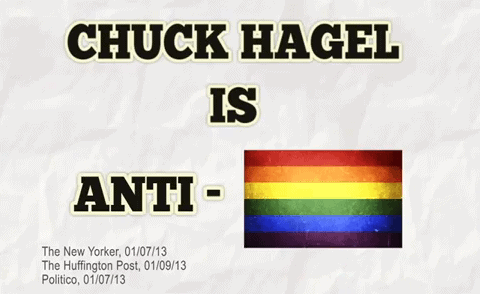 The ad, a 30-second spot calling former Sen. Hagel anti-women, anti-gay, anti-Israel and pro-assault weapons, will run on NBC's Meet the Press, CBS' Face the Nation and ABC's This Week today*, and clearly hopes to churn up the many varied controversies that have swirled around Hagel – but no one is taking responsibility for it. Not directly, at least.

The Huffington Post reports that an anonymous group calling itself "Use Your Mandate" says they're behind it, but they refuse to reveal their actual identities because they claim they're Democrats and independents who work with the president and don't want to complicate that relationship.

The source close to the group said that for now, those involved are choosing to stay anonymous because they are allies with the Obama administration and hesitant to criticize the president publicly or fear retribution or pressure from the White House. The source characterized members as a "concerned group of people who … have some questions about Chuck Hagel," including individuals who have "fought for LGBT rights for a long time."

Chris Geidner at BuzzFeed asked the usual suspects — HRC and GetEqual, for example — but found no leads, but Paul Yandura, a former Democratic staffer who helped get GetEqual off the ground, said whoever is behind it is simply "chicken" and totally eroding the power of their message.

"It's laughable that they want to stay anonymous because they are too chicken to criticize the president since they are his supporters. Either this is a serious enough issue to call out the president or not," he said.

Watch the ad, AFTER THE JUMP.

(*Apparently they're running online ads, too; some are popping up on this very site.)

Previous Post: « News: Day Of Service, Yossi, MJF, ‘Stoker’
Next Post: Joe Biden Has Been Sworn In For A Second Term: VIDEO »