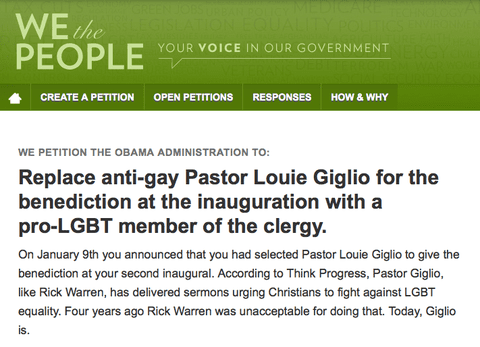 President Obama and his inauguration committee are going to have some added stress over the next few days: a growing movement, including a We the People petition on the White House's official page, to replace Louie Giglio as the inauguration preacher.

Giglio, much like the 2008 inauguration preacher, Rick Warren, has a history of preaching hate against homophobia. "We must reach out and we must aggressively move toward the homosexual community," he said in a 1990s era speech called "In Search of a Standard – Christian Response to Homosexuality."

The We The People petition asks the president to replace Giglio with an LGBT friendly clergy person.