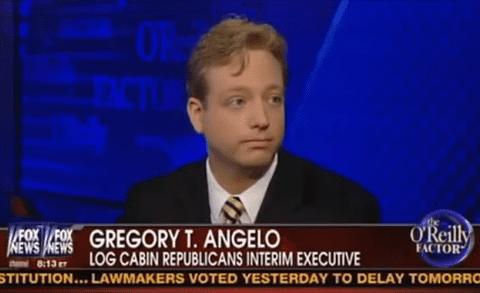 Another day, another story about Defense Secretary nominee Chuck Hagel. Today’s tale, or the first one of today, there will probably be more, is about interim Log Cabin Republican leader Gregory T. Angelo discussing the group’s opposition with Fox News’ Bill O’Reilly.

So, why does the gay GOP group oppose Hagel? “Because we’re Republican,” says Angelo, as if there’s an unspoken rule all Republicans must agree on all things at all times.

O’Reilly also asked Angelo whether a potential cabinet official who opposes homosexuality for religious reasons should be disqualified, to which Angelo responded, “We don’t have a litmus test.” He also talked up his group’s new advertisement in The Hill.

Meanwhile, JK Trotter at The Atlantic Wire wrote a story called “Chuck Hagel’s Evolution on Gay Rights Is Tearing the Log Cabin Republicans Apart,” and it goes a little something like this: “Of the many reactions to Defense Secretary nominee Chuck Hagel’s comments about an ambassador nominee being ‘aggressively gay’… by far the most vexing, and internally divisive, stem from the Log Cabin Republicans.” If there’s one lesson to be learned from this whole Hagel thing it is that opportunism is alive and well in America.

Watch O’Reilly and Angelo talk Hagel and homosexuality AFTER THE JUMP.