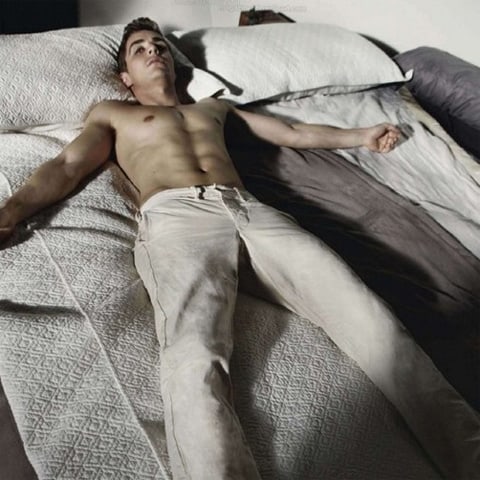 Dave Franco addresses his homoerotic Funny or Die videos in a new interview with Bullett:

Franco has made a career out of accepting his own dares, specifically a series of ultra-raunchy videos he wrote and starred in for the humor site Funny or Die. The the one where he takes an ex-girlfriend’s suggestion to “go f**k yourself” literally and ends up lustfully pounding his own bottom was particularly popular.

“I give the special effects guy so much credit, because my initial idea was to just find a guy who looks like me and film the back of his head,” he says. “But to superimpose my head on somebody else’s body makes the whole thing unique.” This bizarre waggishness has familial roots, the Palo Alto native says, explaining that his two older brothers—artist Tom and actor James—exposed him to certain things “sooner than I should have known about them.”

The resulting twisted sense of humor is on full display in a two-part series of skits for the site in which he and Christopher Mintz-Plasse (with whom he costarred in Superbad and Fright Night) play a game of sexual chicken, delivering come-ons to each other until there’s no choice left but to laugh or vomit. They do both.

“Every meeting and interview I have, people mostly want to address the Funny or Die videos, which I’m happy to do because I feel like they’re an accurate representation of my humor, as twisted as it may be,” he says. “I’m actually excited to talk about them, whereas an actor, at least when you’re first starting out, does a lot of jobs that you wouldn’t necessarily choose to do.”