The Log Cabin Republicans have taken out their second full-page ad, this time in the Washington Post, attacking expected Defense Secretary nominee Chuck Hagel on his gay rights record. The ad also addresses Hagel's recent apology for anti-gay remarks, calling it "too little, too late."

Check out Log Cabin Republicans' second ad, below. See the first one, from the NYT, here. 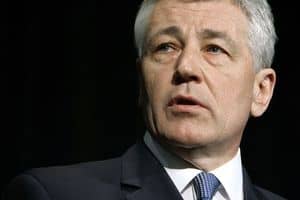 "At Chuck Hagel's request, we looked into the 'totality' of his public record on gay rights, and it did nothing to assuage our concerns that his anti-gay record makes him the wrong choice to oversee the ongoing integration of gays and lesbians in the military. Until his name surfaced as a potential nominee for Secretary of Defense, he has stood firmly and aggressively against not only gay marriage, but also against gay people in general. Log Cabin Republicans helped lead the charge to repeal Don't Ask, Don't Tell and is extremely invested in seeing that we don't lose any ground due to a lack of sincere commitment to gay people and their families on the part of the incoming Defense Secretary."

Interestingly, the extremist anti-gay hate group American Family Association opposes Hagel because he is too pro-gay!

Meanwhile, Rick Jacobs, head of the Courage Campaign and a prominent LGBT activist, is supportive of the Hagel nomination, writing in the HuffPost today:

"Vietnam veteran and former Senator Chuck Hagel is the ideal man to serve as Secretary of Defense. In the small world category, I've known him for over 30 years. In all of that time, I have consistently regarded him as a man of high moral character who puts service and honesty ahead of politics and ambition….And let's be clear about one thing: no one trying to derail his nomination attacks his qualifications. Instead, they seek to score political points and/or act at the behest of powerful special interests by denying the president his choice as defense chief. This sort of political jockeying disgusts the public, further erodes public faith in Washington and weakens our country."

And former Rep. Barney Frank (D-MA) is "dialing back" his opposition to Hagel, according to the Globe:

“I was hoping the president wouldn’t nominate him,” Frank told the Globe today. Although he retired from the House last week after 32 years, Frank remains a prominent gay rights spokesman and has also publicly asked Governor Deval Patrick to appoint him as the interim successor should Senator John F. Kerry resign to become secretary of state.

Were that to happen, it would likely be after any confirmation vote on Hagel.

“As much as I regret what Hagel said, and resent what he said, the question now is going to be Afghanistan and scaling back the military,” Frank said. “In terms of the policy stuff, if he would be rejected [by the Senate], it would be a setback for those things.” …

“With the attack coming out of the right, I hope he gets confirmed,” Frank said today.